With Special Thanks to Mahalia Jackson 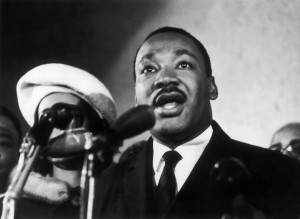 “Behind every great man there is a great woman.” I have heard that said many times. Most frequently by a husband who is patronising his wife. But I think it is important to acknowledge the debt we all owe to the woman, without whom we may not remember the great man, Martin Luther King Jr, in quite the same way.

I was ten years old when I heard Martin Luther King’s now famous speech. It wasn’t famous then of course. It was just a news item. I had been brought up in the BaptistChurch and although I was only ten I was used to listening to old-fashioned, sometimes fiery, bible-thumping preaching. All that was different here was the vast crowd and the preacher who was a black man. It was something akin to the Sermon on the Mount. I recall being rapt by the emotion in Dr King’s voice and by the sincerity of his beliefs. I remember asking if he was the same religion as us and was told, somewhat uncertainly, “not quite son, not quite the same.”

Having watched and listened to the speech several times since 1963, the exhilaration, the feeling of passion I had has only increased. Joan Baez and Bob Dylan* were there of course. I had a sense that if I had only been four or five years older I might have been there too. It was a time to be proud of being human, proud of being part of the human race, part of a movement that wanted to change things, make the world a better place.

Martin Luther King’s Washington speech was made memorable, in part, by the intervention and insistence of one of his followers. She had heard the great preacher some weeks before, at the Cobo Hall in Detroit, telling a congregation of around 20,000 about his dream.

Of course he had a well-prepared speech ready for the ‘March on Washington’. The march was a Civil Rights affair and was ostensibly about ‘Jobs and Freedom’. It is well worth listening to all of it. But there was no reference a dream in it, not originally.

She had clearly been so moved by his vision, his hopes and desires and she instinctively knew what the crowd now needed to hear

Dr. King stopped delivering his prepared speech and started preaching, emphasising his points with the now famous phrase, “I have a dream.” His speech is made all the more memorable because he knows how to ride the lines, how to pace and space each word and phrase. He delivers it with the sort of oratory aplomb that many a burgeoning actor or singer would do well to study. And you know he means it.

But it was thanks to Mahalia Jackson that we have the speech that we still have today. It was her who prompted him to talk about that dream of his. I sometimes wonder whether or not we still have dreams.